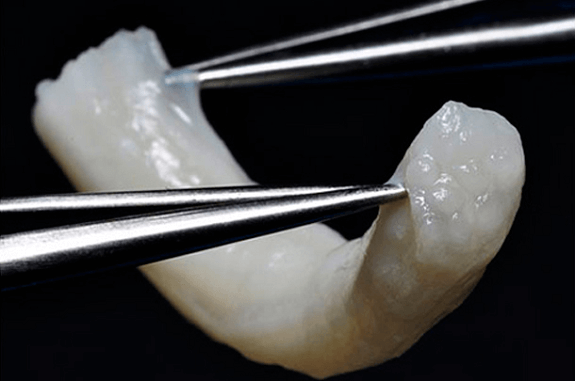 Injury to the inferior alveolar nerve (IAN) and lingual nerves (LN) during dental and oral surgery procedures is an uncommon complication, but understanding the management of the injury is important. Damage to either nerve can lead to numbness and pain of the lip, mucosa and tongue, as well as loss of taste. These deficits can result in significant functional and social difficulties. Proper evaluation of each case allows us to decrease the probability of injury. Damage to the IAN most often occurs during extraction of impacted third molars, but can also occur during injections, implant placement, orthognathic surgery and root canal therapy.  Damage to the lingual nerve can occur during extraction of impacted mandibular third molars, trauma, injection and cancer resection surgeries.

Determining the risk of nerve damage with proper imaging is critical. A panorex and CBCT scan is done to determine the level of risk during an extraction. If a tooth is considered high risk then a coronectomy is indicated.  A coronectomy is the removal of the entire crown of the third molar, leaving the roots in place. This option significantly decreases risk of injury to the IAN (<1%) and similar infection risks as with extraction (3%). The roots often migrate away from the IAN after the coronectomy which rarely requires removal of the roots in a second procedure (3-4%).

Figure 1A: Impacted #32 Proximity to IAN Figure 1B: S/P Coronectomy

IAN injury during implant placement can be a result of retraction of the mental nerve, thermal injury, or mechanical damage with the drill or implant. Proper evaluation of imaging prior to implant placement in the posterior mandible is key. Post-op imaging is always suggested.  If the imaging reveals a violation of the IAN, then removal of the implant is recommended.

If a nerve injury does occur, a thorough history and neurosensory exam is critical in evaluating the case. Both qualitative and quantitative data is taken at each follow up appointment. This includes the patient’s response to sensory challenges involving directional determination, two point discrimination, soft touch and pinprick.  If improvement of sensation is not appreciated on serial monthly examinations, then surgical repair is considered at 3 months post-injury. MRI neurography may also be considered which is an imaging protocol that allows evaluation of the lingual nerve. If nerve pain is present and is relieved with a diagnostic block, then surgical repair is considered for this scenario as well.  Surgical outcomes for patients with numbness only tend to be better than those with pain and numbness (85% vs 65%).

A very important consideration in managing nerve injuries is timing. If the nerve is damaged during root canal therapy or visibly transected the patient should be scheduled for microsurgical repair as soon as possible; preferably within 48 hours of the injury.  If the nerve is injured during implant placement, removal of the implant is recommended as soon as possible.  For all other injuries, monthly neurosensory exams are recommended.

Nerve injuries can be classified into three main categories: neuropraxia, axonotmesis, and neurotmesis. Neuropraxia is the most mild and is often the result of blunt injury or pressure. Spontaneous recovery tends to occur rapidly with neuropraxia. Axonotomesis is often the result of crush injury. It can take 6-12 months to recover, but may result in some permanent dysfunction depending on the nature and severity of injury. Neurotmesis is the complete severing of the nerve, and will need microsurgical repair to achieve any significant recovery.

Surgical treatment is dependent on clinical evaluation during surgical exposure of the nerve. External neurolysis is indicated if the nerve is intact but tethered to surrounding structures with scar tissue. This procedure entails removing scar tissue and covering the nerve with a porcine nerve protector.  Neurorrhaphy is indicated if the nerve is severely damaged or severed.  After removing the damaged portion of the nerve, the proximal and distal nerve stumps are approximated with microsutures, then covered with a porcine nerve protector.

Figure 2A: Repair with Nerve Graft Figure 2B: Nerve Protector in Place

Two case reports are discussed below in order to illustrate the process of evaluation and treatment.

The patient is a 20 year old female who presented with an altered sensation of her right tongue and decreased taste after the removal of all four impacted wisdom teeth two weeks prior.  She also complained of biting her tongue while eating.

The initial qualitative and quantitative neurosensory exam revealed a poor level of neurosensory function with no protective sensation.  An intraoral exam revealed traumatic bite marks to her right lateral tongue.  Imaging with MR neurography was consistent with a lingual nerve injury.

The follow up neurosensory exam at one month and two months later demonstrated no improvement in sensation. The patient then met all the criteria for trans-oral surgical exploration of the lingual nerve and microsurgical reconstruction.

The intraoperative findings revealed a traumatized lingual nerve with neuroma formation. The neuroma was excised and neural continuity was re-established with microsutures.

Figure 3a and 3b: Schematic and Clinical Photograph of Neuroma of the Lingual Nerve

The patient is a 26 year old female who presents with altered sensation of her left lip and chin after root canal therapy to tooth #18 one day ago. She also complained of biting her lip while eating.

The initial qualitative and quantitative neurosensory exam revealed complete anesthesia of her left lip and chin with no protective sensation.  An exam revealed traumatic bite marks to her left lip.  CBCT Imaging revealed endodontic filling material within the nerve canal.  Since the cause of the injury was demonstrable, immediate repair via trans-oral exploration of the IAN and microsurgical reconstruction was planned. The patient was taken to the operating room the next day. 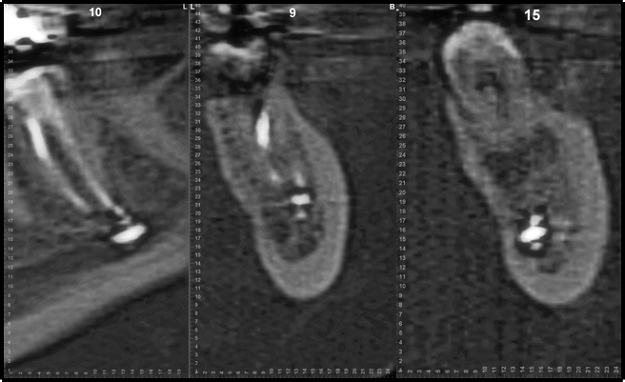 The intraoperative findings confirmed the presence of root canal filling material in and around the nerve.  Consequently, the damaged portion of the nerve was excised and neural continuity was re-established with microsutures and covered with a nerve protector.  The bony window was then replaced with a titanium plate. 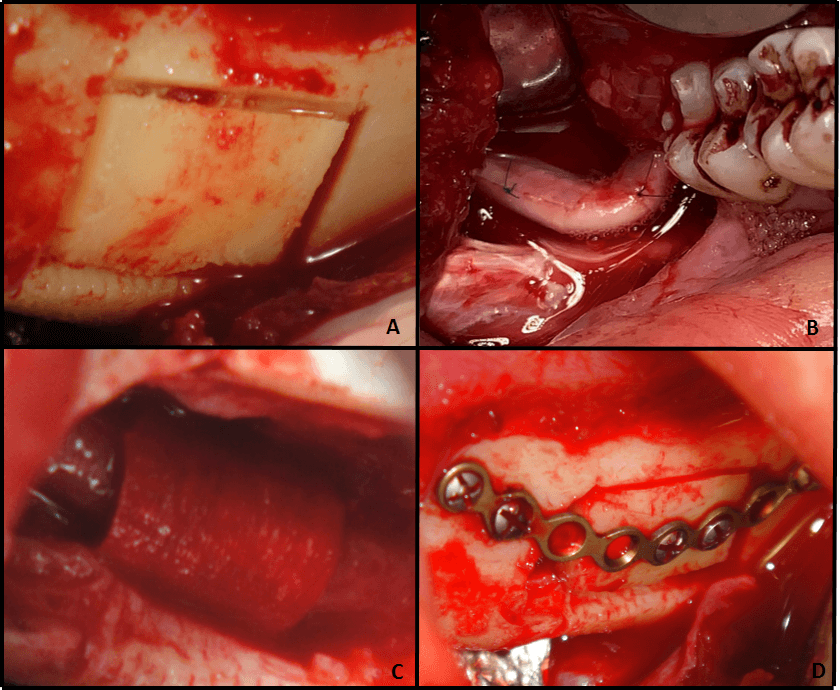 At  1 year post-op the neurosensory exam revealed the return of protective sensation with no pain.

In cases where direct nerve repair is not possible due to an increased gap length after the neuroma removal, an inter-positional nerve graft is indicated. Historically, the sural nerve graft was harvested from the lower leg. A decellularized cadaveric nerve graft is currently the preferred option. This nerve allograft acts as a scaffold which supports nerve regeneration across the gap. This new approach eliminates the need for a second surgical site, decreases the time of the procedure and is associated with neurosensory recovery that is comparable to sural nerve grafting.

Nerve injuries in routine dental and oral surgery procedures are rare but treatable with the proper management.  A thorough and timely exam is necessary to maximize success rates of surgical repair.  The nerve repair unit at NYCOMS is here to assist in any way we can.

Microsurgical repair of the trigeminal nerve is not a common skill set found in an oral maxillofacial practice.

At NYCOMS, we are fortunate to have a team composed of Dr. Salvator Ruggiero and Dr. Bradley Romsa who have been trained and are experienced in this surgical discipline. Dr. Ruggiero learned these skills at Harvard University while training at Massachusetts General Hospital. Dr. Romsa completed his training at Texas Southern Medical Center and Parkland Memorial Hospital with Dr. John Zuinga, a noted authority on micro neurosurgery.

Together, they have developed a NYCOMS approach for the evaluation and treatment of patients with traumatic injuries to the nerves of the jaws and tongue.

After an initial evaluation, a choice of options is presented to the patient. If indicated, surgery is performed at Northwell Long Island Jewish Medical Center or New York Presbyterian Medical Center.